The Senate voted on an extreme version of abortion. It didn’t go well.

Lori Lightfoot is ready to go to war over abortion but no one is sure what she’s going to fight with.

And Madonna hasn’t accepted that she’s not hot anymore.

Dems Are Going All In

The Democrats are going all in on this abortion thing. They’ve decided, for some reason, this is the thing to run on.

Chuck Schumer decided to put a radical abortion bill to a vote on the Senate floor.

A Democrat-sponsored bill that would have legalized abortion through all nine months of pregnancy failed in the Senate on Wednesday by a vote of 51-49.

The bill is known as the Women’s Health Protection Act passed the House in September and would have allowed abortion up to birth. It was not a codifying Roe versus Wade. Not one Republican voted for it and Democrat Joe Manchin voted against it.

Some things about this:

Just dumb. It shows that the Democrats are a mess.

This Is Just Not Right

This is just a sad story and has a special place in my heart.

According to the Daily Wire:

People are blaming the pandemic for the increase in drug overdose deaths.

“The pandemic really upended so many people’s lives, especially people already living at the margins. People lost their jobs, they were isolated. These are all factors that increase problematic drug use.”

We need to remember this the next time we run into a pandemic and it will happen. We have basically destroyed the country over the overreaction to this pandemic. People have died, not only from the China virus, but from the bad policies we put in place.

But the article also skips kind of an important piece. Illegal immigration. Most of the fentanyl in this country is coming over the border. China and Mexico are using the open border to get drugs into this country.

You knew who knew that? President Trump.

Former Defense Secretary under Trump, Mark Esper, claims in his upcoming book that Trump on two occasions wanted to launch some patriot missiles into Mexico to destroy the cartel’s drug labs. The missiles could be launched secretly and the United States could deny they did it. Esper said this would not be a good idea.

Esper was not a fan of Donald Trump. According to the Daily Caller:

Esper also claims Trump is “an unprincipled person who, given his self-interest, should not be in the position of public service.” Esper allegedly considered resigning several times but was allegedly worried that should he resign he would be replaced with a pro-Trump loyalist, which Esper believed would be unfair to the American people.

I am very skeptical of folks that worked with Trump. Many don’t like him. But do I think Trump might have said this? Yes. I would bet a buffalo nickel on it.

Heck, I have always thought we were going to need to do something about these drug cartels. I have even said the best way to deal with them is to go in militarily. We can do that on the basis that the cartels are a clear and present danger to the United States. With 107,000 people dying of drug overdoses, I think the argument is pretty solid especially since Mexico can’t seem to control the cartels for whatever reason.

Trump’s idea might not have been the best, though I think it is, but at least he’s acknowledging a problem and thinking outside the box to solve the problem and protect Americans. Do you see any other politicians doing anything or even acknowledging the the real crisis?

I’m Not Seeing the Math

Chicago mayor, Lori Lightfoot, probably the worst mayor in America today, decided to throw her hat in the abortion debate. 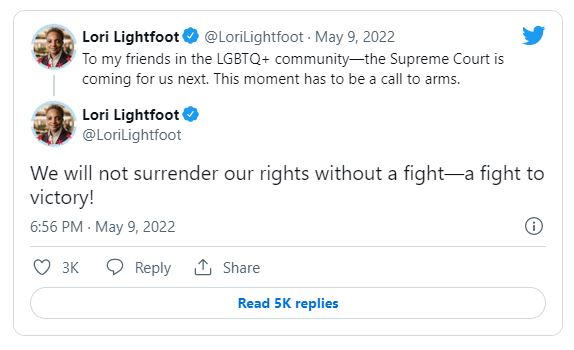 OK, there are some real problems with this:

This is what the pro-abortion Democrats are doing. They are trying to conflate abortion with all the other economic and intersectional talking points available out there.

None of this stuff makes any sense which is why they are so into shutting everyone up.

You Still Want to Send Your Kids There?

Fox News released a list of some of the craziest college classes in the country. I thought this was funny but, then I thought about it, it’s not so funny. Let’s go over that list in no great detail.

You still want to send your kids to college?

Madonna, the 63-year-old singer has figured out a way to make money in her old age.

The 63-year-old singer teamed up with nonfungible token extraordinaire Beeple to create a series of X-rated graphics showing her fully nude and giving birth to butterflies, insects and trees. Called “Mother of Creation,” the NFT collection, which will be sold for charity, also includes a 3D model of Madonna’s vagina — which is on full display in cartoon form on the collection’s highly (don’t say we didn’t warn you) NSFW website.

What is an NFT you might ask. It stands for nonfungible token and what it is a unique digital asset that cannot be copied and that there is only one of. Basically, it is a digital piece “artwork” that is unique and its uniqueness is determined by an encryption token built within it. It’s hard to believe that someone could go into Photoshop and create a picture that someone would pay good money for but there are. One NFT sold for $91 million.

Anyway, Madonna made three NFT videos with her naked and flashing her cooch around.

Why anyone would want bugs crawling out of her cooch, I don’t not know but whatever. Here is an example of one of her NFTs.

Yeah, it’s crap but someone will pay for it. Good news, it is going to charity but this shows how desperate Madonna is for attention.

It also shows how stupid people are that pay for this crap (it’s a 63-year-old woman cooch that has seen more action that Tom Brady). Just to I screen recorded this trash and I now have a copy of what people are going to pay millions of dollars for.