California is trying to become more of a crap state than it already is.

And I think the NFL is going down a road they are going to regret.

More stupid comments from our better. This is going to be an everyday thing, I guess.

Here’s AOC, discussing why it is appropriate to use the term Latinx as opposed to Latino. What a genius:

“Language is fluid”: @AOC says people need to stop getting mad at the term “Latinx.” pic.twitter.com/nynUqHUBkt

Guess what? Most Latinos don’t know what Latinx means. Those that do know think it’s stupid.

Here’s the thing, language is extremely structured. It is not fluid. But this crap philosophy is being embraced and that’s why our kids can’t speak or write.

France figured this out. French is a gendered language and France has banned this crap because they want to protect their language from this type of crap.

In the next clip, Joe Biden has implemented the Defense Production Act to produce more solar equipment. This is something that is only implemented if there is an emergency. One might wonder what emergency is happening that this is needed? Well, someone asked Karin Jean-Pierre and her answer was amazing:

A reporter asks what emergency has prompted Joe Biden to invoke the Defense Production Act to build solar panels.

KJP: "The president, when he takes the Defense Production Act, it's to make sure that he's delivering for the American people." pic.twitter.com/2VvkU9Cr9c

Her answer was amazing because she didn’t give an answer and it took her almost two minutes to give her non-answer.

God, she’s bad at this. Like the rest of the Biden administration, she’s completely incompetent. But she is black and a lesbian.

How does she manage to keep getting more cringe?

Once again, she got lost in her speech. You know how I know that?

According to The Washington Free Beacon:

Following a 2020 law to study the subject, a panel of left-wing academics and policymakers on Wednesday released their findings on how California can remedy the harm against the state’s black residents caused by slavery and discrimination. All black Californians are eligible for the benefits of the program if they can prove they are “descendants of African Americans enslaved in the U.S. or of free Black people living in the country before the end of the 19th century.” A new state agency, called the California African American Freedmen Affairs Agency, would provide genealogical tests for residents.

This is from a 492 page report from a reparations commission created by the governor last year. The Washington Free Beacon has eight different laws that could be created from this real bloated report. Let’s take a look at them.

Is this going to work? No. It’s just going to incentivize black men to have unrestrained sex and have no responsibility for any kid that is born. It is also another reason to keep abortion legal in this state.

We have torn down enough statues. Let’s make tearing down statues legal. Yay!

Congrats, California! You might actually outlaw culture and history.

Do I really need to say anything about this?

The task force wants to “reduce the density” of fast-food restaurants, and promote the opening of “healthy retailers,” such as Whole Foods and farmer’s markets, in majority-black neighborhoods.

Couple of problems with this one:

In other words, redistribution of wealth. A purely Marxist concept.

This could have been written by AOC but would have been no where near 500 pages. All this is is a Leftist wish list. By the way, California has been trying to do all this for years now, they just can’t keep enough people in the state to pay the taxes for it. Well, if they try to implement any of this stuff, they are going to lose more people. People aren’t going to want to get rid of their hard earned money to people who do not produce in this state while the state encourages not to improve themselves.

But, what’s worse, this is racist. Forget about the fact that none of this is constitutional. It is anti-white racism, anti-Hispanic racism and anti-black racism through the bigotry of low expectations.

Speaking of the idiocy of California.

In the case, Almond Alliance of California v. Fish and Game Commission, the California State Appellate Court of the Third District said the “issue presented here is whether the bumblebee, a terrestrial invertebrate, falls within the definition of a fish,” according to legal documents.

According to the judges, the bumblebee is classified as a fish as a liberal interpretation of the word “fish”, as well as the state’s own legislative history, including non-aquatic life.

I understand that bees are dying at a very high rate. I like bees. I don’t kill them because I know the function they provide a function and they are having issues keeping the population up. But define them as a fish?

The judges explained that “although the term fish is colloquially and commonly understood to refer to aquatic species,” the law, as it is written, makes the legal “definition of fish… not so limited,” the court documents show.

In 2015, Fish and Game argued that the definition of fish was too limiting because mollusks (mussels, clams, snails) are not fish. so the courts expanded the definition to include:

This section was changed only once, in 2015, when the state Legislature modified the definition to read “‘[f]ish’ means a wild fish, mollusk, crustacean, invertebrate, amphibian, or part, spawn, or ovum of any of those animals.”

Bees are invertebrates therefore they are fish.

Mind you, this is a state that thinks men can be women and vice versa. Is it me that things Leftists are going backward when it comes to science?

Speaking of Being Confused

The NFL’s Carolina Panthers have decided to add a man who thinks he’s a woman to the cheerleading team. This guy’s name is Justine Lindsay and he’s 29-years-old. 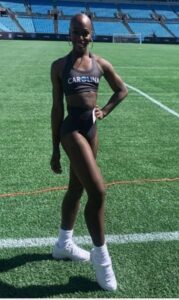 in an interview with Buzzfeed, he said:

“This is big. I think more people need to see this. It’s not because I want recognition. It’s just to shed light on what’s going on in the world.”

Yeah, no, he’s looking for attention. He sees a future in Hollywood or something because people are going to see the freak in the dress dancing around during a football game.

I have a picture of this guy on the website and, you know what, he looks like a guy. He has short hair, no boobs, looks like he still has his twig and berries.

This opens up some question:

Well, good luck to them. I think football, my favorite sport after hockey, is going down the road of the NBA. By the way, hockey would never do any of this crap.